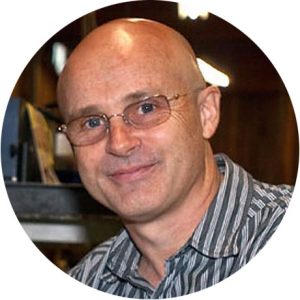 Originally from New Zealand, Grant joined MPL in 1991 as a Mellon Fellow from the Mathematical institute, University of Oxford in England. His research areas are ocean wave phenomena and underwater acoustics, with an emphasis on air entrainment and sound generation by breaking waves, sound propagation, and coastal dynamics.

The scientific objectives of this project are to determine the physical origin of the numbers and sizes of bubbles formed by oceanic whitecaps, and study their role in air-sea gas transport and oceanic ambient noise generation. A series of open-ocean and laboratory studies culminated in an article in Nature describing the scale-dependence of bubble creation mechanisms in breaking wave crests. The ultimate goal of this research is to create models of the transient, two-phase flow within whitecaps to improve models of air-sea gas exchange and ambient noise generation.

2. Modeling the response of bioluminescent dinoflagellates to fluid shear stress.

The goal of this research is to create a mathematical model for the flashing response of bioluminescent dinoflagellates to fluid stimulation. Such a model would allow these unicellular organisms to be used as miniature probes to study fluid shear stress within whitecaps, and perhaps ultimately open-ocean and coastal processes from the light they emit when disturbed.

The objective of this project is to study the interaction between bathymetry, waves, currents, bubbles and underwater sound in the littoral and surf zones, and hence understand the performance of sonars and communications systems in this complicated and dynamic region. Surface gravity waves focus sound as they shoal and, when they break, inject surf injects dense plumes of bubbles in the water column that scatter and attenuate signals. The fluctuations that these phenomena create affect systems performance, but can also be studied to yield information about coastal oceanography. Ultimately, this research will help create better tools for probing the coastal environment and transmitting information through it.

Other areas of study:

An integral part of his research is to set up partnerships with other institutions and laboratories with novel theories and technologies. He has ongoing collaborations with Woods Hole Oceanographic Institution, Institute of Ocean Sciences (Canada), The Graduate School of Oceanography at the University of Rhode Island, Penn State University, the University of Auckland (New Zealand), and the Defense Scientific and Technology Organization (Australia).
Working with scientists at institutions other the Scripps not only allows collaborators to share resources, but also provides an invaluable framework for the exchange of methods, data, and ideas between disciplines.

Grant is also involved in various public outreach and high school education programs. Outreach activities include presenting guest seminars on physical oceanography to high school students in inner city schools through San Diego’s KPBS science outreach program. He has also given talks to students about careers as a scientist through La Jolla Country Day ’s vocational program and serving as a facilitator for UCSD ’s summer student conference. Grant has also served on the science textbook review panel for the San Diego City School District in 2000.

“What inspires me as a researcher at MPL is the opportunity to gain some insight or understanding about the ocean by looking at it, measuring it and, whenever possible, actually getting into it! There is a truly impressive range of length and time scales operating in ocean dynamics, and it wouldn’t be hard to spend a lifetime being fascinated by the pattern of their interactions and trying to understand their role in global climate change and marine ecology.

My research group here at MPL consists of talented and hard-working individuals who are committed to excellence and teamwork. I am continually amazed and grateful for the contribution they make to me and to science”.